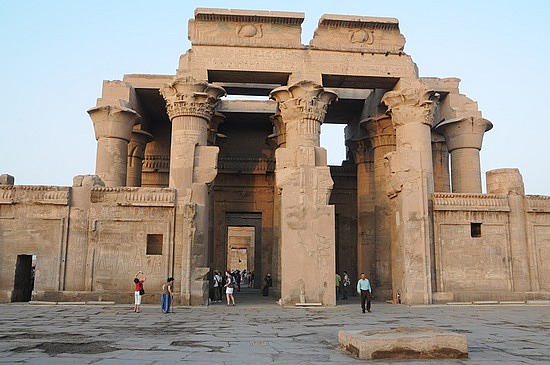 Located in the town of Kom-Ombo, about 28 miles north of Aswan, the Temple, dating to the Ptolemy’s, is built on a high dune overlooking the Nile. The actual temple was started by Ptolemy VI Philometor in the early second century BC.  Ptolemy XIII built the outer and inner hypostyle halls. The outer enclosure wall and part of the court were built by Augustus sometime after 30 BC, and are mostly gone.  There are also tombs from the Old Kingdom in the vicinity of Kom-Ombo village.

The Temple known as Kom Ombo is actually two temples consisting of a Temple to Sobek and a Temple of Haroeris.  In ancient times, sacred crocodiles basked in the sun on the river bank near here. The Temple has scant remains, due first to the changing Nile, then the Copts who once used it as a church, and finally by builders who used the stones for new buildings.

Everything is duplicated along the main axis.  There are two entrances, two courts, two colonades, two hypostyle halls and two sanctuaries.  There were probably even two sets of priests. The left or northern side is dedicated to Haroeris (sometimes called Harer, Horus the Elder) who was the falcon headed sky god and the right to Sobek (the crocodile headed god).  The two gods are accompanied by their families.  They include Haroeris’ wife named Tesentnefert, meaning the good sister and his son, Panebtawy.  Sobeck likewise is accompanied by his consort, Hathor and son, Khonsu.

Foundations are all that are left of the original Pylon.  Beyond the Pylon, there was once a staircase in the court that leads to a roof terrace.  The court has a columned portico and central altar.  There is a scene of the King leaving his palace escorted by standards. Near the sanctuary is a purification scene.  On either side of the door to the pronaos are columns inscribed with icons of the lotus (south) and papyrus (north), symbolizing the ‘two lands’ of Egypt.

In the southwest corner of the pronaos is the one column that does not echo the duality of the temples.  Here, there are scenes depicting purification of the King, his coronation and his consecration of the Temple.  The ceiling has astronomical images.

The hypostyle hall has papyrus capitals on the columns.  Here, there is an inventory of the scared places of Egypt, the gods of the main towns and the local and national festivals.

In the anti-chamber, there are scenes depicting the goddess Seshat launching the building of the temple, followed by a scene of the completed temple with the king throwing natron in a purification ceremony.  The staircase leading to the roof is all that remains of the offering hall.

Statues to the gods and the builders of the temple once occupied the net room just before the sanctuaries.  The ceiling of the pure place to the north still remains with an image of Nut.  There is little left of the sanctuaries.

It lies in Edfu town, 123 km north of Aswan on the west bank of the Nile. It dates back to the Ptolemaic period. It was dedicated to the worship of god Horus represented as a falcon. It is one of the most beautiful Egyptian temples, distinguished by its huge splendid structure that blends Pharaonic and Greek architecture.

Its grandeur competes with Luxor temples. It is the second largest temple after Karnak. It also houses the Nilometer and a huge pylon at the entrance. It was discovered in 1860 by the famous archaeologist Mariette. On its walls are reliefs which depict the history of Ptolemy’s and reflect religious belief and art style of the period.

And that is the ends of our services

All transfers by Air-conditioned non-smoking coach or mini-bus

Visits Temple of Kom Ombo and Temple of Horus in Edfu

A bottle of mineral water per Tour

All service charges and taxes

If you are interested in Services of experienced Egyptologist French, Spanish or German speaking Tour Guide is available with supplement of 30 US Dollars per the party not per person

Any extras not mentioned in the program

What the Budget of This Tour?

Dear Clients please knows that the tour price cover the services stated in the “Inclusions” section only of this page.

What the Minimum of This Tour?

The Tour run minimum of two persons in case of solo Traveler it will be a different rate, for that case there will be 50.00 US Dollars supplement will applied

How long time this tour takes:

Prices are quoted in US Dollars per person per Tour and valid year around.