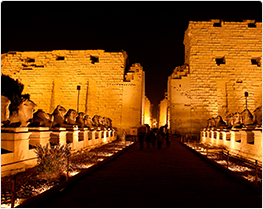 The Karnak Sound and Light Show highlights the dramatic history of ancient Thebes. The show narrates the achievements of some great Pharaohs, with poetic descriptions of the ancient treasures. As visitors walk through the complex of temples, pharaohs arise to tell the story of their interesting lives, as haunting music mysteriously flows through this ancient city. Ancient and poetic voices tell the visitors about the birth of Karnak temple and the heroic achievements of pharaohs and god Amun. It is an enchanting and supernatural experience to listen to sound effects and gaze at the magnificent ruins illuminated during the well-presented show.

It is one of the most important temples of the city of Luxor; its construction started in the reign of King Seti I, and was completed during the reign of King Ramses II. It is located three kilometers to the north of Luxor temple. it eas built for the worship of the sacred trinity of Tehbes, Amoun-Re, his Wife, Moot, and son.

It is considered the largest temples of the ancient world. Its construction began in the reign of the central state, about 2000 BC. At that time, it was not built at that level of magnitude, however, in the modern state, to which King Tut Ankh Amun and King Ramsis are affiliated; a magnificent temple was built on the ruins of this temple that embodied the magnitude of the Egyptian vast empire. During the following dynasties, each king added more to the temple as in adulation to gods and out of desire of getting popularity among the members of the people.

Pick up from your hotel to enjoy an enchanting time at one of Egypt’s finest outdoor spectacles at Karnak Temple. Here the history of the great Pharaohs of the 18th and 19th dynasties is narrated with dramatic sound and light effects. Walking through the darkened temple to the sacred lake, the ancient history of this awe inspiring temple complex will come alive.

After finishing your tour we will transfer you back to your hotel and that is the end of our Services.

All transfers by Air-conditioned non-smoking coach or mini-bus

All service charges and taxes

Any extras not mentioned in the program

The Temple of Karnak itself is actually made up of three main temples, several smaller walled temples and a large sacred lake. The three main temples are dedicated to Amun, his goddess wife Mut, and the god Montu. The museum contains a collection of statuary that was found throughout the temple complex.

Karnak Temple is reached by a grand avenue lined on each side with ram-headed sphinxes, originally nearly two miles long. Visitors then pass through the massive Hypostyle Hall, famous for its rows and rows of columns. The paint at the tops of the columns can still be seen today, thousands of years after it was applied by the careful brush of an ancient Egyptian painter.

This room is 54,000 square feet and has 134 columns, and to this day it is the largest room of any of the world’s religious buildings. Queen Hatshepsut, who challenged ancient Egyptian history by becoming the first female pharaoh, was aware of how important Karnak was, and she had her thoughts inscribed on a towering obelisk: ‘O ye people who see this monument in years to come and speak of that which I have made, beware lest you say, ‘I know not why it was done’. I did it because I wished to make a gift for my father Amun, and to gild them with electrum.

Referred to as the world’s largest open air museum, Luxor, known as Thebes in ancient times, is home to some of the most spectacular monuments of the ancient world, Perhaps one of the most astounding areas in Luxor is the temple complex of Karnak. The largest temple complex ever built by man, Karnak represents the combined achievement of many generations of ancient builders.

Passing through the gates of Luxor, every visitor is astounded by the expansive city made immortal by its gigantic monuments. Though much of Luxor and Karnak are in ruins, the site remains one of the crown achievements of ancient Egypt. The massive columns of Karnak once supported heavy ceilings, but today they are open to the sky. With a little imagination, the visitors of today can be transported back in time to the days of the pharaohs. Over a period of 1300 years, the temples built at Karnak became an entire city of monuments.

What the Budget of This Tour?

Camera, Comfortable shoes for walking, light clothing in the summer, Heavy clothes in winter as its open area

How long time this tour takes:

Around 2 Hours the show is one hours

Prices are quoted in US Dollars per person per Tour and valid year around.

50 US Dollars per person

For solo travelers 10 US Dollars supplement